I have done some experimenting with pickling before, even though I  am always intimidated by pickling. At least when you cook or bake, you know the result right away! With pickling you have to be patient and wait. And what if it doesn’t work out?!

So far, my pickling amounted to some marinated lemon and pickled persimmons. I have been wanting to make real Russian sour cabbage forever. Something always came up, but a week ago – I decided to stop procrastinating on the subject!

After speaking to my mother, who made a ton of this stuff back in Russia, but who can never give you any measurement “A handful, a pinch, a bunch, as it takes”, these are the terms she operates with, and watching some YouTube videos, I decided to give it a try mixing everything I know.

A handful of cranberries (sorry, I am my mother’s daughter)

After slicing the cabbage very thin, I have massaged it with salt and sugar, added carrots, cranberries, and massaged it a little bit more mixing everything together.

I have covered it with a plate and put a press over.

I have been poking it with a skewer twice a day, and on the second day, after tasting it, I realized that I lacked salt, so I added some. 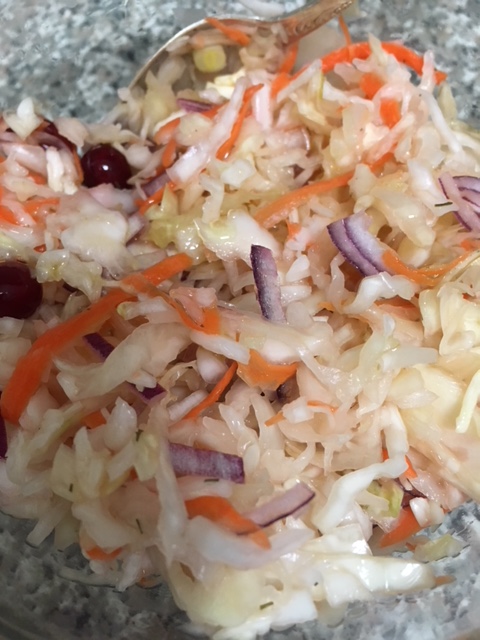 So, after 5 days like this, I finally tasted the cabbage (I think it’s great!) and packed it into jars. I have not sterilized them, just rinsed them in boiling water. On Shabbat I ate it adding just a tiny bit of sliced red onion and olive oil.

Hopefully, my guests will enjoy it.