This Parshah seems to contain many inner family struggles. First, it reminds us again that each birth is a miracle. As other imahot – אִמָּהוֹת – pra-mothers, Rivka did not immediately give birth.

Once she finally became pregnant, her troubles just started. And she was wise enough and pious enough to look for answers to her questions at the right place.

As Rabbi Becher says “Esau was not born evil, he had skills, and his father wanted to give him his blessing because he felt that Yaakov was too other-worldly to spread monotheism”, he was not able to survive in the wild world. But the mother knew best.

When the twins are born and behave so differently, does that mean that they are not loved by their mother? Can any mother really say that she loves one child and does not love another? As I mother, I find it hard to believe. She feels the pain of her son’s wrongful decisions, but that cannot mean she loves him less.

Yet, the parents’ overall attitude toward the children creates a case for sibling rivalry, a case that lasts until today.

As mothers, don’t we feel that it would be much better if our limbs hurt rather than watching a child suffering from a papercut to their pinkie?

Of course, she is ready to take his curses upon herself, as long as he lives, he is happy and safe.

I prayed for them

Now one is about to kill the other

Both of them I love. How can I make them be friends?

Tradition tells us that Rivka is talking about an unfortunate possibility of losing both her husband and son in one day (considering that Esau promised to kill his brother as soon as their father dies). Clearly, no mother would be able to live with a son, who murdered his brother, so I submit that Rivka was thinking of losing all three of them in one day having at least to send her murderous son away forever. No one would envy that possibility.

Thankfully, she was so wise as to make Itzhak sent Yaakov away as if of his own accord to find a wife for himself. That is a new story. May we live through this week in peace to hear it. 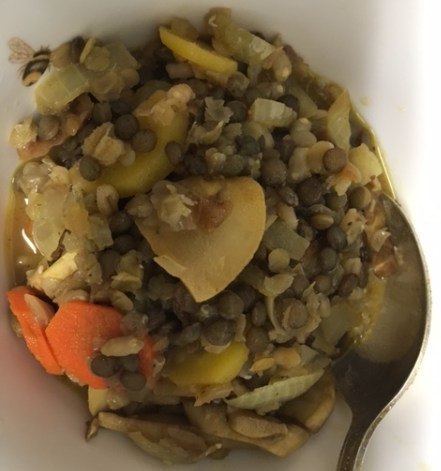 This is one of the Parshiot when I simply had to cook something appropriate. Of course, the lentil stew’s recipe that Yaakov gave Eusau  is not known to us, but I hope, the one below will be ancient enough, healthy enough, and modern enough for you to try this week

I decided about making this just today, so this is as spontaneous as they come:

For 1 cup of green, red, or mixed lentils:

1 lb mushrooms ( I took a mix of baby bella, shitake, and crimini)

2 rainbow carrots (you can take regular ones too)

Salt, pepper, paprika, turmeric, za’atar, sumac, lemon juice from fresh lemon to taste. You can, of course, use other spices that you like. These are my every-day ones. I would add fresh cilantro at the end, but this time I didn’t have it.

Soak lentils and barley separately in a bowl of water each for a couple of hours. If you have organic French lentils, do not soak them too long, they cook much quicker than regular ones.

Meanwhile, sautee diced onions with a little bit of your favorite oil. I used a mix of olive and sunflower oils. Add chopped mushrooms and fry them for at least 7-10 minutes until almost done. At this stage add the spices to your taste.

Boil lentils and barley separately in salted water. Your barley will take almost twice the time of lentils if you use French organic ones. 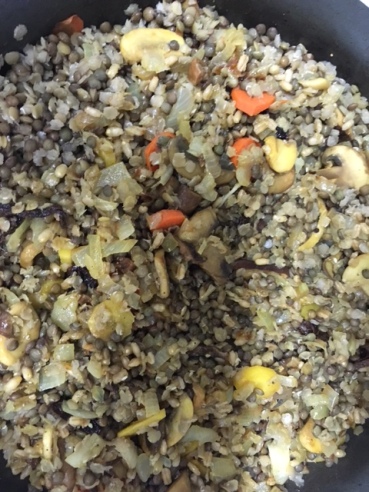 While the lentils and barley are cooking, sautee celery and carrots cut in small rounds, and add cooked mushroom mixture.

Once the barley and lentils are almost ready, mix everything together with about half a cup of vegetable broth and simmer for just a couple of minutes. You cad add more broth if you want the stew more of a soup consistency.

Sprinkle with some chopped cilantro and enjoy during your Shabbat meal discussing our ancestors.