This is our life. One can never definitely say what is going to happen tomorrow. Remember from Bulgakov: “для того, чтобы управлять, нужно, как-никак, иметь точный план на некоторый, хоть сколько-нибудь приличный срок. ” (in order to manage, you need, after all, to have an exact plan for some, at least some decent time.) ?

So, preparing for my world traveler daughter’s arrival, I planned to do lots of things. I managed only one – bread!

This was my first really great bread from my own sour starter that I have been carefully cultivating for a few weeks feeding it twice a week, and discarding to my dismay lots of good rye flour. This bread literally takes two days, albeit in short settings. The only way I can make it is if I start Thursday night and finish Friday in two settings – very early morning and right before Shabbat. Since I still did not buy real Russian malt, and therefore, couldn’t make the real Borodinsky bread, I had to settle for the next best thing – a sour starter rye bread. A while ago, I got the Rye Baker book in an advanced copy. My version doesn’t have the page numbers or color photos, but it does have not only the recipes, but an amazing introduction that helps you understand the whole process of making of the rye breads. This one was called Milwaukee immigrant bread.

If you don’t have the book, but have the sour starter, here’s the recipe for which I had to finally buy a tiny kitchen scale:

As far as I understand, to bake rye bread you really have to be precise, at least until you have a strong habit for it. I am just hoping to develop it.

Mix all of the ingredients, cover and leave overnight at room temperature. In the morning, you should see the mixture at least twice bigger with a porous structure and sour smell.

In the morning add together the sponge mixture, 300g bread flour, 216g rye flour, 204g warm water, 14g of salt, 6g of instant yeast, 68g unsulphured molasses, 44g (one big egg) and 34g melted butter. If you have a standing mixer – you are in luck. I used my hands as always. The dough didn’t take as much effort as I thought it would, though. I was adding about 80g of flour while kneading for about 10 minutes. I then covered the dough, which by that time became a nice size ball and left it to rest on the counter.

After about an hour, I turned it onto a wooden board and kneaded just a little bit adding some caraway seeds.

After I divided the dough into three parts (these are not too big, if you want decent size breads, cut the dough in two parts), I brushed it with the egg wash, sprinkled with more caraway seeds and baked with a steam pan under it for about 15 minutes at 375F. Then, I removed the steam pan and finished baking for about 35 minutes.

The bread smelled like heaven and tasted like that as well. I couldn’t stop eating it at the Shabbat table. 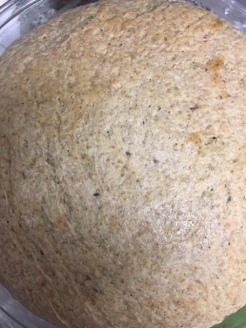 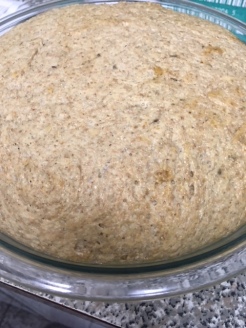 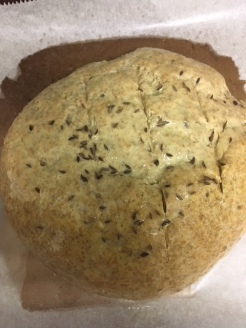 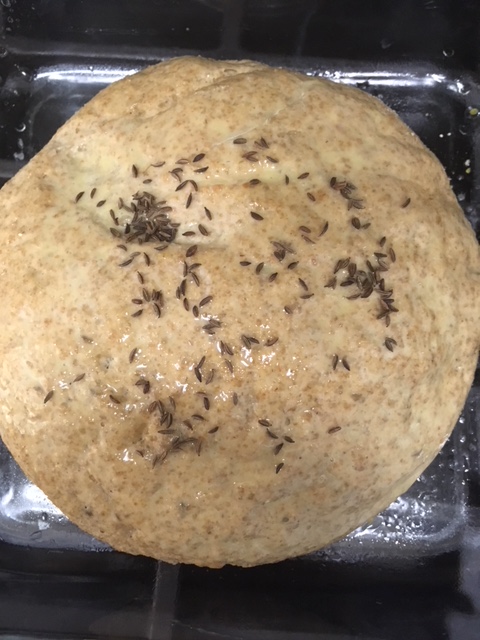 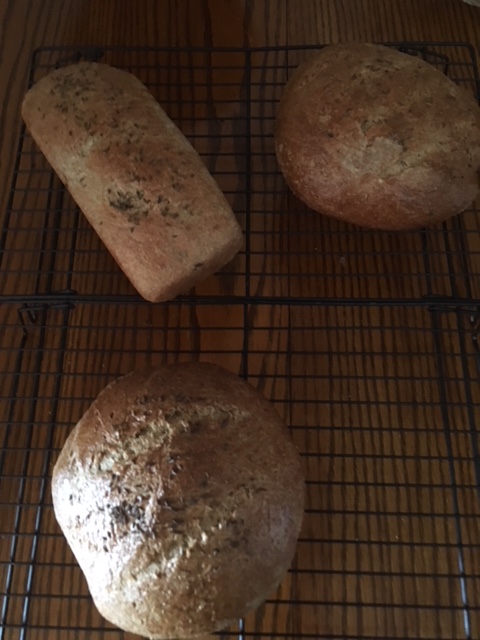 However, during Shabbat day, my sore throat hinted that I was getting sick, and even though I spent pretty much two days trying to fight it off, I feel that I am becoming weaker and sicker by the hour. So much so that I have dropped and broken my favorite cup, so sorry about that!

So, as we all know, we may plan, but Gd may have other plans for us. My job is now, as always, is to try and figure out what those plans exactly are. Wish me luck!