שְׁמוֹת – is known by the name “exodus”, the second book of Torah. In reality, it means simply “names”, exactly how the verse starts:

This parshah, possibly, more than any other is filled with female characters. It first starts with two amazing women who dare to disobey the pharaoh. 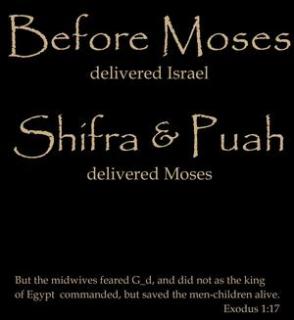 The pharaoh is a god of this land

But there’s a real Gd, much higher

How can I take a life that He gave?

Please, Gd, save me from murder

Then, we see a girl, who the rabbis say is directly responsible for the birth of Moses, her brother – Miriam. She is not named in this episode, but the Talmud (BT Sotah 12b, 13a) says that not only she convinced her parents to stay together, but she prophesied that a child born would become “the savior of Israel”.

There is so much to say about the women in this parshah – Yocheved, Miriam, Shifra, Puah, Batya (Pharaoh’s daughter). I am hoping to make a presentation about Miriam this year at Limmud FSU NY.

Wise women were in the long runs always the ones to save their nations, and sometimes, the humanity itself from disasters. Not only Jewish women in whose merit the Jews were taken out of Egypt (BT, Sotah 11b) but women of other nations. Consider the women of ancient Greece trying to stop the war by withholding from their husbands.

Today, when many women in this country are attending marches and protests, my question to them is – would it be not wiser to see the actions first and judge by them, not by words.

A great point has been made by my colleague, Dr. David Ackerman today:

“The two foundation texts in Jewish thought encouraging involvement and activism are God’s admonition to Abraham to , “…be a blessing.”  (Genesis 12:2) and even more pointedly, “Seek the welfare of the country where I have sent you into exile; pray to the L-rd for it, for your welfare depends on its welfare.” (Jeremiah 29:7)”

May we live through this week in peace, and may we see real peace in our times, whether brought in by women or men.