There are not too many women whose stories are told in detail in the Torah. Sarah is one of these unique women that merits this validation from the Rabbis:”Avraham was secondary to Sarah in prophecy” (Shemot Raba 1:1). This woman was outstandingly beautiful, wise, modest and strong-willed at the same time. Yet, her death was painful, as the Torah implies that she died not really knowing what happened to her only son. We read in this week’s Parshah about her death right after the Akedat Yitzhak.

All my life I was praying for this miracle child

They tell me you killed him

She died alone, without her husband at her site:

Because of her living and dying in Hebron, Sarah is forever binding us to this magical and painful place.

“She was the first of the Patriarchs and Matriarchs to be buried in the Cave of Machpelah. Her distinguished funeral teaches of the great esteem in which she was held by the inhabitants of the land, who all locked their doors and came to pay their respects to Sarah.” (Tamar Kadari)

She was buried in a place worth its size in gold. When Abraham learned of her death, he came to buy the cave to make sure his family ownership would never be challenged by people of the region. Ephron, in real Middle Eastern fashion, offered Abraham the land, but at the smell of money, asks for a price of the whole area, not just a cave:

Unfortunately for us, Abraham’s descendants, the Jewish ownership of the cave of Machpelah as well as the whole town of Hebron is still under attack from the world that refuses to learn the history, therefore is bound to repeat its mistakes. The world does not want to remember the story of 1929 – the massacre of the Jews in Hebron including the doctor who was treating both Jews and Arabs of the area and his whole family. So, despite the exorbitant sum of money paid for this piece of land, despite the fact that no one disputes the truth that our pra-fathers and pra-mothers are buried there, we are still struggling with the ownership rights. However, specifically, this Shabbat thousands of people gather in Hebron to celebrate this woman and this land every year.

No sooner the story of this remarkable woman ends in this week’s Parshah, the new, young one comes to center stage:

Rivka (Rebecca), the future wife of Itzhak, a beautiful and super kind young lady gets a marriage proposal from Abraham‘s servant. An interesting point that is often overlooked by contemporary feminists denouncing Judaism for its “mistreatment of women” is that her fate is not decided by her male relatives. To the contrary, a young girl, she is asked if she is ready to follow the man to meet her future: 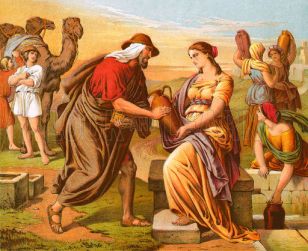 is determined young lady, who is quick to offer service and hospitality to Eliezer, is on par with Sarah. Torah tells us that

There are midrashim that, together with RASHI say that Rivka revived the miracles of Sarah’s home that seized since her death – her candles did not die out from Shabbat until the next one, the dough that rose enormously without yeast, the protecting light/clouds upon her tent.

This Shabbat, let us think about two women whose names open and close this week’s Parshah. May we merit at least a sparkle of light from their candles.