This was the first Rosh haShana ever that I have not made or eaten any meat during the holiday. I cooked myself, and I have sat at the tables of my friends, where meat was served, even my favorite lamb, but I wasn’t moved to try it. Is this a good development in my life? It might be. So, I am becoming a vegetarian parent of vegetarian daughters. Maybe it’s “back to your roots” move for me. After all, our ancestors in ancient Eretz Yisrael ate, mostly, bread and vegetables – beans, lentils, cucumbers, onions.   Unless, of course, they were of priestly descent, then the sacrificial meat was in abundance in the family.

Another food habit that is common between my ancestors and myself is the love of cheese. Not only the Jews of old times ate cheese, but they used it to their benefit 1 Samuel 17:18:

My namesake, Yehudit, has used cheese to achieve a military victory. So, I love cheese. Whether made from cow’s milk or whether it is goat cheese, it can be found in my refrigerator always. I use it freely in dishes cooked and raw. I can easily add some cheese to any salad.

So one of the things I made for the Seuda hamafseket was real Israeli knafeh – what could be better than sweet cheesy dessert?

It turns out that knafeh is surprisingly easy to make. The hardest part, perhaps, is to find the actual kataifi dough. I was able to find it at an Israeli grocery store, and am now convinced that it has made its way

You don’t even have to thaw the dough before starting to cook!

I have taken the original recipe from the great Michael Solomonov’s book, Zahav. As usual, though, I have to add my own twist. As all Middle Eastern pastries tend to be very sweet, I have dropped the amount of sugar, just a bit, and have added about a tablespoon worth of slightly roasted and crushed pistachios.

Here are the pictures of the process: 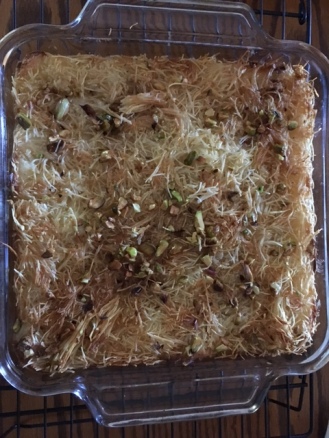 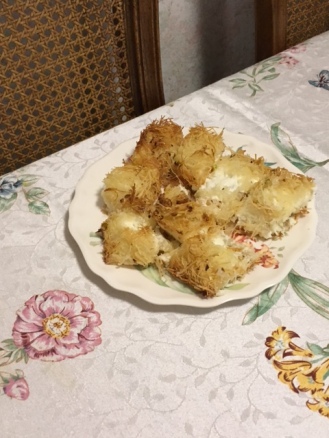 The only drawback of this mount of deliciousness was that it was a bit hard to cut – too soft as it has lots of filling. However, I would rather sacrifice the beauty for the taste. And what a taste! This is, for sure, going to be my Shavuot staple from now on.

I highly recommend getting the ZAHAV book, but if you don’t have it, do comment here, and I will post the full recipe.

At my readers’ request, here’s a full recipe:

Combine the ricotta and sugar with a mixer until nice and smooth, refrigerate

Combine the cream and sugar in a small pot over medium heat stirring all the time until the sugar dissolves. Refrigerate

Combine kataifi breaking it by hand into small pieces and mix it with the cream mixture in a large bowl until the cream is evenly distributed. Spoon half of the mixture into a baking dish (I used a glass dish and sprayed it with coconut oil spray just a bit). Cover tightly with oiled parchment paper, and press evenly. Put a heavy weight to make sure it’s smooth all over. I used a nice and heavy glass container for this. Refrigerate for 1 hour.

Preheat the oven to 375F. Remove the parchment and spread the ricotta filling evenly spreading it with a spatula. I use this type, it’s nice to work with on many cooking occasions. Spoon the remaining part of the dough evenly, gently press with the same oiled parchment paper piece, pull it off and discard.

Bake for about 50 minutes until golden brown.

Meanwhile prepare the lemon syrup combining sugar, lemon juice, and zest in a small pot over the medium heat constantly stirring until the sugar is totally dissolved. Strain the syrup. At this point, I’ve added some roasted pistachios to the syrup.

Once you took the knafeh out to a rack, drizzle the lemon syrup all over. Cool, cut and enjoy!